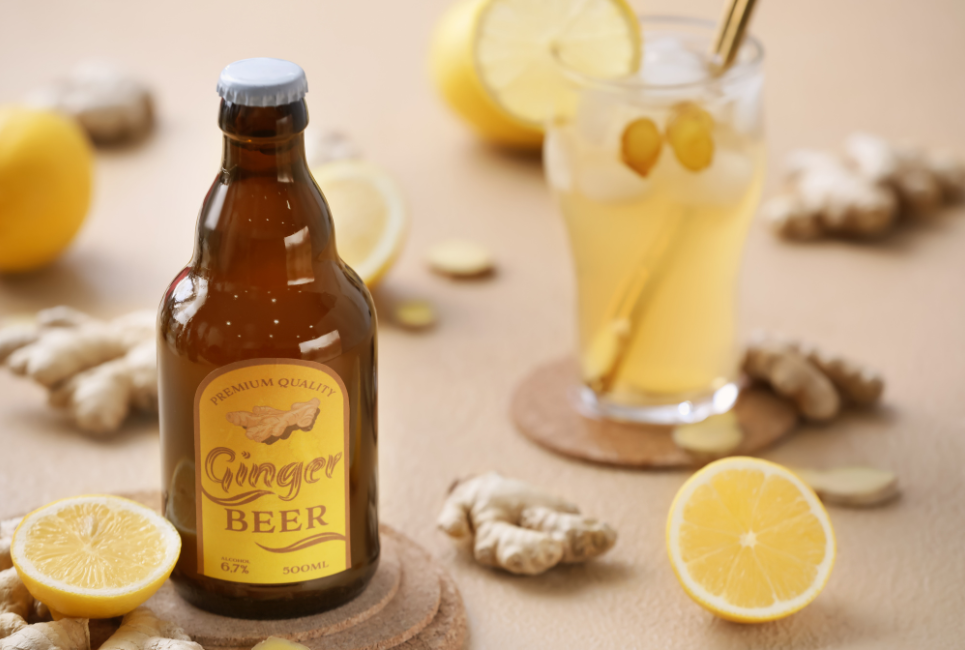 Did you know that ginger beer and ginger ale are two different things? Many people think they’re the same, but they’re not. This blog post will outline the differences between these two drinks and what makes them unique.

What is Ginger Beer?

Ginger beer is a refreshing, slightly spicy drink that can be enjoyed on its own or used as a mixer in cocktails.

While there are many different brands and formulations of ginger beer, the essential ingredients are water, sugar, ginger root, and lemon juice. Some recipes also call for yeast, which helps to create the slightly fizzy quality of the drink.

There are some potential health benefits associated with ginger beer. Ginger is thought to be a natural remedy for nausea and stomach upset, and drinking ginger beer may help to settle an upset stomach.

Ginger is also believed to have anti-inflammatory properties, which could help to reduce pain and swelling. Some evidence suggests that ginger may also boost immune system function.

What is Ginger Ale?

It is a carbonated soft drink that has a ginger flavor and is often sweetened with cane sugar or high fructose corn syrup. It is usually clear or pale yellow.

There are many purported health benefits of ginger ale, although most of these have not been backed up by scientific research. Some people believe drinking Ginger Ale can help relieve nausea, motion sickness, and indigestion, improve circulation and boost immunity.

Invented in the early 18th century by a Londoner named Jacobsen, ginger beer quickly became one of England’s most popular soft drinks. It was also one of the earliest carbonated drinks and was exported worldwide.

Traditional ginger beer was made with fresh ginger, sugar, and water. But brewing technology improved, and brewers added various other ingredients to their beers, including herbs, spices, fruits, and even champagne yeast. This led to a wide variety of different styles and flavors of ginger beer.

Over the years, ginger beer has fallen out of favor somewhat, but there is currently a revival of interest in this unique drink. And with its delicious spicy flavor and bubbly texture, it’s easy to see why!

The history of ginger ale is a long and interesting one. Ginger ale was first created in the early 1800s by John McLaughlin, a chemist from Belfast, Ireland.

McLaughlin was looking for a way to make a carbonated beverage that was also healthy and refreshing. His recipe for ginger ale included fresh ginger, rosemary, and cardamom seeds. The drink was an instant hit with residents and soon became famous all over Ireland.

As word of the delicious new beverage spread, other countries began to make their versions of ginger ale. In 1851, Canada dry-commercially released its drink version, quickly becoming popular in the United States. Canada Dry Ginger Ale soon became the leading brand of ginger.

Difference Between the Two

There are a few critical differences between ginger beer and ginger ale.

These factors combine to make ginger beer a bit more of a sophisticated drink than your average can of pop.

Ginger beer contains water, sugar, ginger, citric acid, and carbonated water. It may also contain other flavorings, such as lemon or lime.

However, there are variations in the recipe. For example, some brands add peppercorns, star anise, or other flavors to the drink. In Canada and the United Kingdom, ginger ale often contains a small amount of alcohol.

How Are They Made?

Ginger beer is made by fermenting ginger solids, sugar, and water. The fermentation process creates carbonation, giving the drink its characteristic fizz. Some brands of ginger beer also contain alcohol, but most are non-alcoholic.

Traditionally, ginger beer was made by mixing grated fresh ginger root with sugar and water, then allowing it to stand for a few days to allow the fermentation process.

Today, many commercial brands of ginger beer use a refined form of this traditional recipe, powdered or concentrated ginger, instead of fresh ginger root.

Ginger beer is a popular drink worldwide and can be enjoyed on its own or mixed with other drinks to create cocktails, such as the Moscow Mule or the Dark and Stormy.

To make ginger ale, manufacturers start with a syrup made by boiling sugar with water and flavoring it with ginger. This syrup is then mixed with carbonated water to create the final product.

Ginger ale originally started as a homemade remedy for stomach aches and nausea. The first recipes dated back to the 1830s and were often made using brewed ginger, lemon, and sugar. Many still make their ginger ale at home using simple recipes that can be easily found online.

How do They Taste?

Ginger beer has a spicy, peppery taste and a slightly sweet aftertaste. Some varieties are also slightly sour. It is often enjoyed cold and over ice or mixed with liquor such as vodka or gin.

Ginger ale tastes like a carbonated version of ginger root tea. The flavor is spicy and slightly sweet. It’s a refreshing drink that can be enjoyed cold or hot.

You can go about flavoring your ginger beer in a few different ways. One way is to add fruit juices or purees to the mix. This can give the ginger beer a nice, subtle flavor.

You can also use spices like cinnamon or nutmeg to taste it differently. Make sure the ingredients are added in the correct proportions to get the desired flavor.

One of the most popular ways to enjoy ginger beer is to mix it with vodka. It’s also great in cocktails like a Moscow Mule or a Dark and Stormy. Ginger beer can also be enjoyed on its own as a refreshing beverage.

To use ginger ale as a home remedy for nausea and vomiting, drink 1 to 2 cups of ginger ale when you feel nauseous or vomit. You can also sip ginger ale throughout the day if you have an upset stomach.

Bundaberg Ginger Beer is one of the most famous ginger beers on the market. This Australian brand has a rich, spicy flavor that many people enjoy. If you’re looking for a ginger beer with a bit of a bite, Fentiman’s Rose’s Lime Cordial Ginger Beer is a great option.

In my opinion, the three best brands of ginger ale are Canada Dry, Schweppes, and A&W. Canada Dry has a long-standing reputation for quality and is widely available.

Schweppes is also a well-respected brand with a pungent taste. A&W Root Beer is not as widely available but has a great flavor.

However, there are many different brands of ginger beer and ginger ale on the market, so it depends on your taste preference. If you want a classic spicy ginger flavor, go for a good quality ginger beer.

Are you Team Ginger Beer or Team Ginger Ale? Either way, both drinks have health benefits that can help improve digestion and fight illness- so drink up!

But if you prefer something sweeter with hints of citrus and vanilla, then an ice-cold bottle of Schweppes Ginger Ale might be more up your alley. Let us know in the comments below.