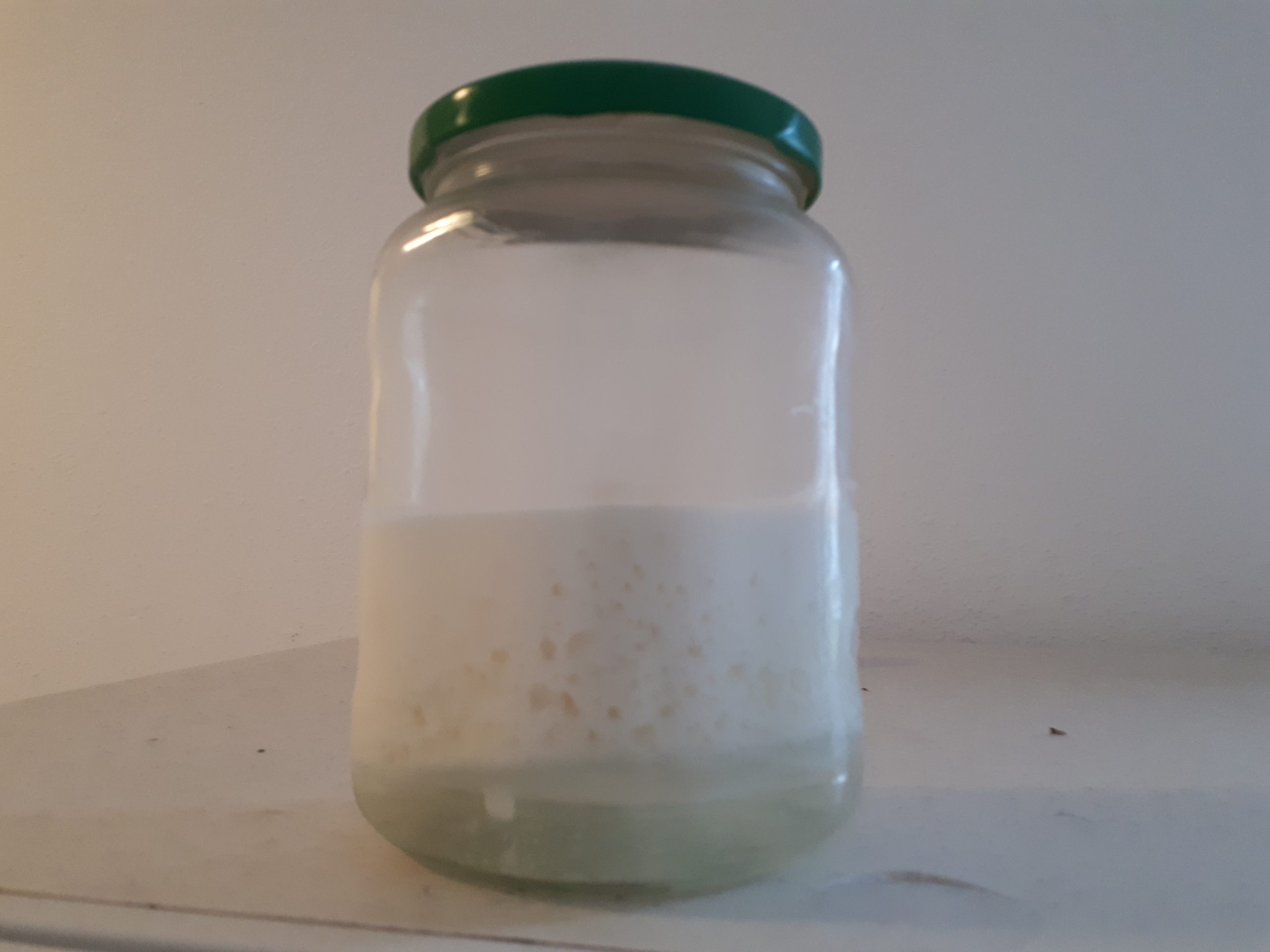 I recently set up a new batch of kefir and it got me thinking about the alcohol that is produced during fermentation. I had read articles about the alcohol in kombucha but never heard anything about kefir. So, I did some research. Does kefir have alcohol?

Kefir can have an alcohol content of 0.05-0.5%. The alcohol is produced during the fermentation process when the yeast breaks down the milk sugars (lactose) into alcohol and carbon dioxide.

Surprising, right? Your healthy homemade kefir can almost have an alcohol content of a very very very light beer. In this article, I’ll cover how much alcohol you can expect in water and milk kefir, why there is alcohol in the first place, and how to reduce the alcohol content in kefir!

Contents hide
1 How much alcohol is in kefir?
1.1 Alcohol Content in milk kefir
1.2 Alcohol content in water kefir
2 Why is kefir alcoholic?
3 How to remove alcohol from kefir
4 Can you get drunk from kefir?
5 Conclusion
6 Author

How much alcohol is in kefir?

Typically, kefir has an alcohol content of 0.05-0.5%. Although it has been reported to be as high as 0.75%. The actual content will vary depending on the preparation method and external fermentation conditions.

There can also be a substantial difference in the alcohol content between milk and water kefir. Water kefir tends to be slightly higher in alcohol than milk kefir due to the added sugar.

The alcohol content in milk kefir will typically range between 0.1-0.5%. In milk kefir, the alcohol is produced by yeast such as Candida, Kluyveromyces, and Saccharomyces that break down the lactose (milk sugars).

In water kefir, the alcohol content can be as high as 0.75% and as low as 0.1% depending on how much sugar is initially used in the fermentation process. It is important to point out that this amount of alcohol is also typically found in overripe fruit or other fermented beverages such as kombucha.

Why is kefir alcoholic?

The process of fermentation in both milk and water kefir produces alcohol as a byproduct. Thus, alcohol is created as a natural consequence of the yeast and bacteria doing their jobs, just like in beer production.

In milk kefir, the yeast breaks down the lactose into alcohol and carbon dioxide. Bacteria then turn the alcohol into acids. However, if the balance of yeast and bacteria is out of whack and the yeast has taken over, the bacteria won’t be able to convert all of the alcohol.

As a result, a rest amount of alcohol is left in milk kefir. Luckily there are some easy ways to remove or at least reduce the amount of alcohol that is left after fermentation. I’ll go over some simple tips in the next section.

Fun fact: in Russia kefir is frequently taunted as a hangover cure because of its alcohol content. So, I guess it all depends on your perspective. During my research I also found this amusing poster encouraging Russians to reject alcohol during meals:

In water kefir, the process works essentially the same way. Instead of the lactose being turned into alcohol it is the sucrose that has been added in the form of simple sugar.

How to remove alcohol from kefir

It will almost be impossible to completely remove any alcohol from kefir since it is a natural byproduct of fermentation. However, there are a few things you can do to dramatically reduce the alcohol content of your finished kefir beverage.

Most of the following tips apply to milk kefir since the solution for water kefir is just benignly simple, so let’s start with that:

While the alcohol content in kefir is fairly low and not something one has to be concerned about it’s always a good idea to aim to reduce or remove it. The above methods will all help with that but will likely not get your kefir to 0% alcohol.

Even carefully prepared kefir is not completely alcohol-free and can contain as little as 0.05% alcohol. So, this begs the question: can you actually serve kefir at your next party as a social lubricant?

Can you get drunk from kefir?

You could theoretically get drunk from kefir; you would just have to drink a lot! Assuming an alcohol content of about 0.5% you would need to drink at least a gallon (3.4 liters) of kefir to notice any effects.

And there are probably many other reasons why drinking that much kefir is not a great idea. Especially, when first starting out with fermented foods it is important to give your body time to adapt to the inflow of live microorganisms.

That said, a glass of kefir a day will not get you drunk.

To most people’s surprise and wonder kefir does actually contain alcohol. Although the amount is usually minimal it can build up over time and there are several reasons you might want to reduce the alcohol content as much as possible.

Since alcohol always starts out with sugar it’s easiest to reduce the amount of sugar available to ferment. The longer you let your bacteria do their work and turn alcohol into acids the less of it there’ll be when you drink it.

Personally, I have never felt any intoxicating effects from drinking my homemade.