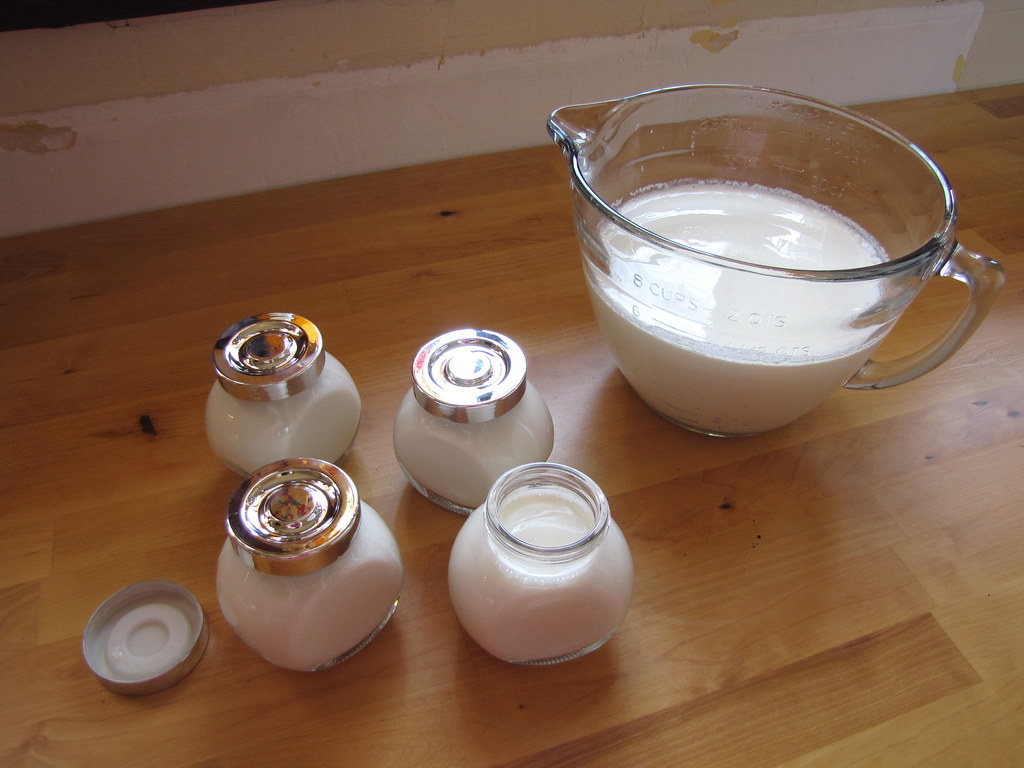 Yogurt and sour cream seemingly are two birds of the same feather. Both are made by fermenting milk and have a slightly sour taste. But there are actually some significant differences between the two. So, what’s the difference between the two and can you replace one with the other?

In this post, I’ll highlight all of the differences between yogurt and sour cream and also answer some common related to replacing yogurt with sour cream and vice versa in cooking and baking. We’ll also look at the difference in preparation and some potential health benefits of both.

How yogurt is made

Yogurt starts out with whole milk. Usually the first step in making any kind of yogurt is to heat up the milk to around 170° F. The purpose of this is two-fold:

The heating and cooling down of the milk will also allow for the separation of skim and cream which occurs right after. The cream has a higher fat content than the skim and will determine the fat content of the yogurt in the end.

The next step will be to add some of those live cultures to get the fermentation process started. These lactic acid-forming bacteria work themselves through the milk turning the milk sugar (lactose) into lactic acid.

The fermentation process typically only lasts a few hours and as a result, most yogurt is essentially lactose free (or at least very low in lactose) and acquires a sour taste.

How sour cream is made

Sour cream is made in a very similar way to yogurt. The main difference is that the milk is not separated from the cream but rather mixed together in order to achieve a thicker consistency and a higher fat content.

However, the basic process is the same. First, milk is pasteurized by heating it up to high temperatures for short amounts of time in order to homogenize it and kill potentially harmful bacteria.

After some of the water in milk has turned into vapor the lactic acid bacteria are added to the mix of skim and cream. Skim and cream are not separated as they are in yogurt production! As a result, sour cream ends up with a much higher fat content than yogurt.

A 100 gram serving of yogurt contains around 59 calories. In contrast, 100ml of milk will be somewhere around 43 calories. The reason for this difference lies in the preparation method. Since milk is heated in yogurt production, excess water in milk is removed and yogurt becomes a nutritionally more dense food.

The macronutrients that are most present in yogurt are proteins. 100 grams of yogurt typically contain around 10 grams of protein covering 20% of your daily value. You will also get around 0.4g of fat and 141mg Potassium with the same serving.

When it comes to micronutrients, yogurts contains plenty of Cobalamin, Calcium and Vitamin B-6. One serving of 100g plain yogurt will cover 13%, 11% and 5% of those micronutrients respectively.

One 100g serving of sour cream will add 193 calories to your diet. This means that sour cream contains more than three times as many calories as plain yogurt. This is due to the much higher fat in sour cream resulting from the cream and skim being fermented together.

100g of sour cream provides around 20g of fat and covers up to 30% of your daily value in total fat. In contrast, the same amount of yogurt only contained 0.4g of fat. With sour cream you’ll also get a boost in Cholesterol at 52mg per 100g and some additional Sodium and Potassium.

The protein content of sour cream is fairly low at only 2.1% compared to yogurt’s 10%. In terms of macronutrient, yogurt appears to be the overall healthier option.

Sour cream is high in Vitamin A and also provides some Vitamin B-6 and even Vitamin D at 12%, 5% and 3%. Both Vitamin A and D are not found in yogurt. However, yogurt is higher in Cobalamin than sour cream.

Both sour cream and yogurt offer about the same Calcium and Magnesium content at 115 and 2% daily value per 100g.

The obvious benefit of consuming yogurt in terms of macronutrients is its high protein content. Just a couple of spoons of plain yogurt for breakfast can cover your daily value of protein by 20-30%!

Sour cream simply cannot provide the same protein power. In turn, it contains a lot more fat and the same serving of sour cream would significantly add to your daily value of fat (which is not necessarily bad).

In turn, sour cream consumption also boosts your Vitamin A and D supplies which are vital micronutrients for our bodies. Yogurt also contains some important Vitamins like Vitamin B-6 but non of the fat-soluble ones (A, D, E, K).

Overall, if yogurt or sour cream will benefit you more depends on the type of diet you are following and your health goals. Neither yogurt nor sour cream is inherently good or bad, but now that you know what the nutritional differences are you can make a more informed choice the next you are unsure which one to pick.

Live bacteria are added to both yogurt and sour cream to start the fermentation process and turn lactose into lactic acid. This process is exactly the same for yogurt and sour cream, however, since with yogurt only the skim of the milk ends up being fermented, the resulting proliferation of good bacteria will also be higher.

This is because the skim part of the milk contains nearly all of the lactose. By removing the cream first the resulting mixture will be more densely packed with milk sugars giving bacteria more to eat.

When cooking or baking with cultured foods in general, make sure not to expose them to high temperatures. Doing so will kill all of the beneficial microorganisms that have grown during fermentation.

“Homemade yogurt” by litlnemo is licensed under CC BY-NC-SA 2.0