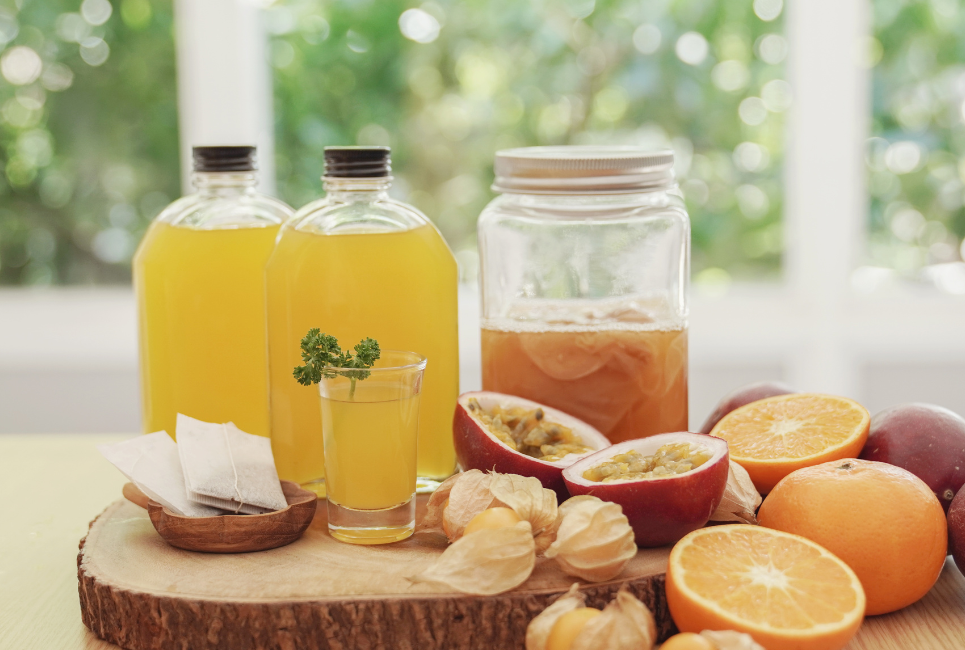 In order to understand the differences between Kombucha and Apple Cider Vinegar, we first need to talk about what they are and the extensive process used to produce them.

How are Kombucha and Apple Cider Vinegar Made?

Kombucha is a popular carbonated probiotic drink that is created from tea undergoing fermentation. Known as one of the oldest brews in the world, the brewing practices of Kombucha initially started over 2000 years ago in China.

An ancient beverage slowly being forgotten in the modern day, it has become highly liked only recently because of its delicious taste and oodles of health benefits.

Typically the method for making this drink begins by freshly brewing the tea and waiting 7-14 days for it to go through the aerobic fermentation cycle.

The process of fermentation occurs because of the presence of a cluster of bacteria, yeast, and starter tea.

Talking about the process, it starts with the yeast reacting with the sugar and tea extracts to produce ethanol (type of alcohol). Ethanol is then decomposed by the bacteria present to produce carbon dioxide, which results in the drink having effervescence.

It is usually passed through another fermentation process, resulting in the drink having a sweet flavor. This process requires raw Kombucha to be mixed with flavoring agents and packaged in an airtight container.

This ultimately results in anaerobic fermentation in the absence of oxygen, collecting carbon dioxide and making them more bubbly.

Apple Cider Vinegar is perhaps one of the very few beverages in the world whose name states exactly what it is and how it is created.

In its essence, Apple Cider Vinegar is apple juice that goes through the fermentation process with mixed cider yeast, during which the bacteria convert the apple juice to sugar and then alcohol into acetic acid and carbon dioxide.

Recently Apple Cider Vinegar has become increasingly popular because of its significant health benefits. People believe it to be a superfood, and taking one shot (1oz) per day has now become a trend among health gurus.

Now that you know how Kombucha and Apple Cider Vinegar come into existence, let’s compare them and find the best fit for you!

During the time, Kombucha made a name for itself for centuries because of the helpful bacteria and probiotics it contains. Health professionals believe that an average person’s diet contains ample sugar, which harms the beneficial bacteria in your stomach.

This is where Kombucha comes into the picture; its bacterial and probiotic properties replace and restore the bacteria present in the stomach and improve the digestive system. It also helps with weight loss and boosts your immunity level!

Talking about health, Kombucha also contains the benefits you would typically get from tea. Healthline says it can enhance brain function (better mental health), boost metabolism, decrease the threat of a variety of cancers and improve heart health.

Unlike Kombucha, Apple Cider Vinegar provides very few benefits by itself. However, if incorporated into a healthy diet and paired with an exercise plan, it can offer several health benefits.

One of its main benefits is that it can lead to reducing blood sugar levels in diabetic patients.

This claim was proven correct by a study concluding that Apple Cider Vinegar can enhance insulin production and reduce blood sugar levels in the test subjects.

Maintaining a normal blood sugar level leads to many improvements in health, such as fast metabolism, which can aid in weight loss.

Some people believe that Apple Cider Vinegar by itself promotes weight loss, but that is not factually correct. However, it is significantly deficient in calories – one spoon of Apple Cider Vinegar is only three calories, and drinking that amount can give a person a sense of fullness. This suppresses appetite and assists in dropping some extra pounds.

It’s important to know that Kombucha is not advisable for women who have conceived or are breastfeeding since it has a small trace of alcohol in it. However, processed Kombucha available in the market is a considerably safer option for such women as it only has 0.5% alcohol.

Moreover, for some people, Kombucha consumption can lead to stomach aches and nausea because of the probiotics and bacteria in its formulation. These ingredients are generally very beneficial for the health of your stomach. Still, for first-time drinkers and people with a sensitive stomach, it can lead to nausea, stomach aches, diarrhea, etc.

Lastly, if you have weak immunity, then Kombucha is NOT for you. The presence of bacteria and yeast in Kombucha can make your body vulnerable to some severe infections.

Apple Cider Vinegar can slow down the rate at which food exits your stomach, making you feel nauseous and bloated for an extended period of time. It can also lead to tooth enamel erosion because of its severely acidic nature.

Now that we’ve discussed the differences between Kombucha and Apple Cider Vinegar, let’s answer the question you came here for.

Kombucha vs Apple Cider Vinegar: Which is best for you?

There is no hard and fast rule to determine which one is better than the other. The ultimate decision will be more subjected to your preference, budget, and lifestyle.

We believe that with its bundles of benefits and taste, it’s pretty hard to beat Kombucha – however, it costs way more than Apple Cider Vinegar.

So if you’re willing to spend some extra bucks for that Kombucha goodness, we give you the green light to go ahead!